Ben WaddingtonPosted on January 1, 2015 Posted in 101 Things Brum Gave The World No Comments

The world of Roxy Music is distant and fantastic: dream homes, smoky nightclubs, crunching gravel drives. Only occasionally is it specific (Acapulco, Havana, Quaglino’s of Mayfair) but it’s always exclusive territory. By being unspecific, Roxy could be anywhere and everywhere… the point was that they were somewhere you weren’t. A decade later, Duran Duran used the same trick: pop fans were transported far from the grey lagoons of Birmingham, Leeds or Newcastle.

Aged 15, I entered these Transtopias after opening the gateway of Roxy Music’s For Your Pleasure LP and goggling at the gothic, befeathered form of Eno grooving with a guitar, first L-R in a five-strong line up of guitar wielding band-mates. His flamboyant costume also made an impression on the young Morrissey: catching sight of Eno’s jacket hanging from a tour bus parked behind the Manchester Apollo in 1973 brought the unattainable to the banal. Morrissey states the encounter began his route to pop stardom.

After two albums touring timeless, placeless locations, Eno was ejected from the Roxy into his own universe of Faraway Beaches, icecaps, kitchenettes and driveways. The closest you get to a geo-fix is ‘just up from Wales’.

How to anchor any of these icy, opulent, extraordinary locations in Birmingham?

The answer lies with Carol McNicoll: Birmingham born ceramicist, former Old Rep wardrobe department and later girlfriend of Brian Eno. Her stint in the Rep’s costume department qualified her as designer for Eno and Andy MacKay’s stage wear in the earliest Roxy line up. She is credited with design supervision on Eno’s solo LP Here Come the Warm Jets. The sleeve zooms in through a psychedelic array of household bric-a-brac, overflowing ashtrays, Carol’s own vases and general flea market tat, visually alluding to the songs and lyrics contained within.

Carol is now long established as a ceramicist and she exhibits her work internationally. BM&G features her work in its C20 pottery collection and the V&A have her Eno costume filed next to classic Ziggy Stardust outfits. She regularly returns to Birmingham to visit family (as does Brian) and will be in conversation with me about her pots, costumes and Birmingham years at BCU Parkside on Fri 13 Feb. 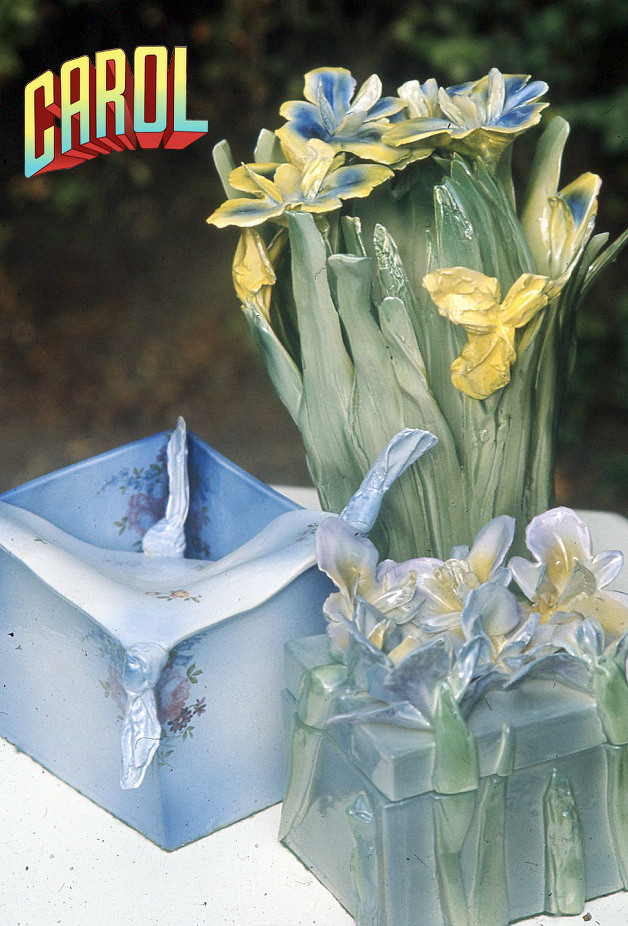