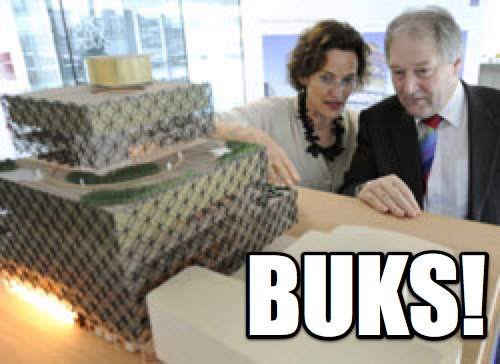 Local councillors often communicate in a torturous combination of management speak and political spin. They share the oratory and obfuscatory ambition of government ministers but lack the support of hundreds of SPADs or the rhetorical benefits of a classical education. But for a time the ruling officials of Birmingham — the largest local authority in Europe — spoke to the city in the simple, grammatically incorrect, language of the internet cat.

A site called Lolitics from 2008 to 2012 took the publicity images — hard hats, awkward grins, pop-up banners and all — of the politicians and added lolcat-style captions, poking a very new type of satirical fun at a group of people who hadn’t quite grasped how communications were working in the world of social media. Council Leader Mike Whitby, a blustering older David Brent in a multicoloured tie, was lampooned as a man who spoke in one noun sentences, while Councillor Deirdre Alden, the most thrusting of a husband/wife/son team on the Conservative benches, became a paranoid princess obsessed with building her ‘shiney (sic) army’ (a group of supporters, most often in hi-vis jackets performing some community good).

Speaking on condition of anonymity, (he might want to “bring it back should the buggers get back in”) the creator of the site talks about how it was very simple to set up:

“Lolitics came from noticing that local politicians in Birmingham seem to delight in the most ridiculous photos with no apparent sense of how ridiculous they are. The lolcat meme was then at its height and spreading to other areas. I’d kinda mastered the art of writing ‘I CAN HAZ’ in a blocky font on a photo, so combining the two was a no brainer.”

“Curiously, the Conservatives provided the most tone-deaf photos. I really wanted to bring Tom Watson [then cabinet minister and still Labour MP for West Bromwich East] into the fold but his photos were annoyingly sensible. Siôn Simon [Erdington’s Labour MP and mayoral hopeful] did oblige, however, and was cast as Siôn-Droyd, a robot. But it was really all about Deirdre, Mike and those who surrounded them.”

“For those who operated in that world it was probably quite audacious, sticking two fingers up to authority or telling the emperor he was naked.

While our Lolitics producers may have thought nothing was really going to happen, satire has a history of effecting political change. In his book Hammer and Tickle Ben Lewis talks to satirists, politicians and dissidents about the role anti-communist jokes played in bringing about the end of the Soviet era. In each country there were official state satirical magazines set up to counter the dissenting anekdot (a Russian word describing a rambling, but often pointed joke). Even Mikhail Gorbachev acknowledges the power of satire, in 1989 he told a crowd of workers that “anekdoty were our salvation”.

Whether it is possible to attribute real change to the use of satire, or whether it just makes those who tell the jokes feel better, can’t be empirically proven. But the social media world seems to provide a platform for a host of jokes aimed at the political class. The Lolitics creator sees his site as part of “a much broader tradition in the UK, from Punch to Private Eye to The Thick Of It, “laughing at powerful people and pointing out that they are flawed humans like the rest of us.” And it’s this democratisation of the means of satire production that may be producing a new satire boom — and possibly one large enough to create a real difference.

Clifford Singer created the website MyDavidCameron.com to parody the Conservative Party’s election campaign posters of 2010 by inviting people to create spoofs and altering the slogan to ‘Airbrushed for Change.’ According to Singer, the website took off with more than 90,000 unique visitors in the first two weeks alone. It’s not a leap to imagine that some voting intentions were influenced by this explosion of parody and, with such a tight result in the election, this could have contributed to the 2010 hung parliament instead of the predicted Tory majority.

One of the Tories that narrowly missed a winnable seat in that election was none other than Deirdre Alden — by this point widely known in Birmingham circles as LolDeirdre. A council communications insider (again anonymously) admits that not only was Alden aware, she was extremely bothered by the Lolitics infamy, “I know Deirdre didn’t like it at all,” they said.

Councillor Phillip Parkin, who is active online himself, says of his colleagues, “The vast majority were probably unaware, but the reaction varied— it was either taken in good spirit or wound people up, which of course made the whole thing even funnier.” But when asked if it changed anything Parkin is more sceptical. “It might have worked on a subtle level in getting people to sharpen up their act,” he says. “The people behind BCC Newsroom [a blog run by the Birmingham City Council communications department] are [now] no doubt careful to ensure that what they put out online doesn’t leave itself vulnerable to being satirised.”

The Lolitics team say that Alden’s reaction itself shaped their satire:

“Mike Whitby and the other targets appeared to ignore Lolitics like the insignificant gnats we were, but Deirdre did actually get in touch demanding that we stop using her photos. It was copyright infringement, of a kind, but I wasn’t really interested in the niceties. The main thing was we’d hit a nerve, and when you hit a nerve that’s when things get interesting.

“The reaction was to keep going. I was getting bored around the time the second demand came through, and knowing she was annoyed made me want to continue. By this time I’d gotten to know a bit about the person behind the smile, from people who had worked for her at the council, and didn’t particularly like what I saw.

“She shut down the initial Flickr profile through copyright infringement so we moved to Tumblr. I guess Tumblr didn’t reply to her so she emailed us directly. And then nothing.”

The use of copyright law to silence online protest isn’t unusual in the UK. Loan company Wonga recently attempted (unsuccessfully) to get a satirical image removed from Twitter on the grounds that it contained their copyrighted character and logo. The Open Rights Group is campaigning (see righttoparody.org.uk) for a change in the law that would allow parodies to use copyrighted material. Their website gives many examples of how political satire and campaigning are hampered by the law as it stands: “Greenpeace had their most creative videos removed from YouTube because they dared to remake Volkswagen’s Star Wars themed adverts. Time and again creative, thoughtful and just plain funny works are removed from public view,…all because some people can’t take a joke.”

But laughing online is more than just a way to pass the time, it can have real — and perhaps more obviously constructive — benefits. The online civic activism of the people of the UK’s second city has included ‘translating’ huge consultation documents into plain English (and getting thousands of comments) and building a better version of the council’s £3M website—for free and in a day.

Jon Hickman is senior lecturer and researcher at Birmingham City University and developed its MA in social media, he explains that this would have been less likely without the power of humour and the community it creates.

“Online humour, or rather online banalities, are where social capital is developed. Strong ties that can be put into action come from sharing experiences, such as a memorable online game or joke – even a recurring joke about a local politician. Genuine but very local memes are at the heart of anything that we might call a Brum online psyche. If people didn’t share jokes about ‘snowcock’ – the building of a penis out of snow, the sharing of photos of the snowcock – you wouldn’t develop such a rich network, you wouldn’t develop it so quickly and then when you want to perform a civic action you’d struggle. But because Birmingham had a group of people engaged in banter, jokes, satire and tweeting pictures of their lunch you could mobilise them to do things like the Big City Plan plain English project or the BCCDIY project. You could actually make social capital useful beyond jokes, but without banalities and shared experiences you wouldn’t get that traction.”

Both Hickman and Parkin see a lack of this sort of satire now, Parkin says, “On a local level there’s not enough, though of course Paradise Circus (paradisecircus.com) is superb.”

Hickman thinks that part of the reason might lie in the colonisation of the local online space by commercial interests:

“What we have now within hyperlocal [a term used to refer to ‘very local’ online sites] media is a set of producers who are trying to establish and define their practices and to do that they draw on three sets of ideas to explain themselves. These are ideas around the nature of journalism, around the role of the internet and new media in producing news, and around the needs of communities. I don’t see humour sitting within that overly. Hyperlocal media, in the sense that organisations such as Ofcom might talk about it, is very straight, almost po-faced. So long as hyperlocal producers have to fight to justify their right to publish and their claims to the truth I doubt they’ll have the confidence to express their work through much humour and satire.”

The man behind Lolitics favours a more prosaic explanation, however, he says, “Maybe it’s just a reflection of the times. Back then people were mostly weary of these idiots the party machines were churning out. Now things are more serious.

“And the Birmingham Tories are now the underdogs so poking fun at them wouldn’t be quite so satisfying. When they can actually inflict damage again then maybe, but for now there are probably more important targets.”

The 2015 general election may be the ‘internet election’ many pundits have been predicting. If it is then the power of the people to satirise their leaders will be a decisive factor — those boom years in Birmingham might prove to be prophetic.

This article in CC licensed and originally appeared on Contributoria: The Independent Journalism Network.