Despite calls in the media, old and new, and noises from some quarters (not as many as we’ve got, like but…) it’s being reported that the Labour group on Birmingham City Council is actively against having an open debate and a hustings event for the election of a new leader of the largest local authority in Europe.

With five candidates now declared that leaves 73 people voting on who leads a city of over a million. And they won’t even be open about the process.

They’re gagging the people of Birmingham and that’s not good enough.

Sign our petition for an open process. Add a gag to your social media profiles in protest. Read more.

Chamberlain Square features still a statue of Birmingham’s great campaigner for electoral reform, Thomas Attwood. One wonders what he would make of it. 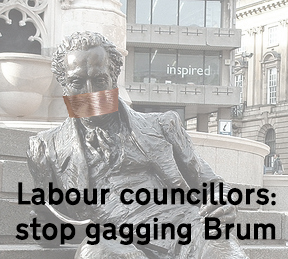