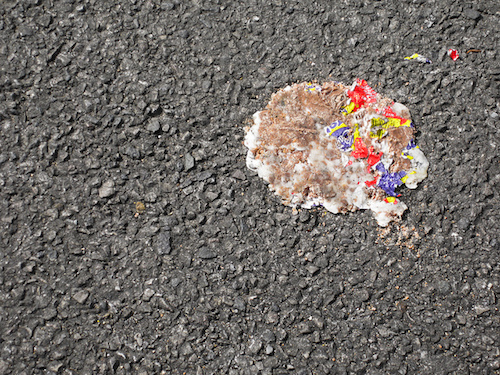 Trap one in the gents at my work is always locked. No one ever goes in; no one ever comes out. I call it Willy Wonka’s shithouse. To myself that is – it doesn’t really come up much in conversation.

That, rather than the two films, the West End musical, or the use of ‘Oompa Loompa’ to describe the spray-tan aficionados on Broad Street, is how I know that Roald Dahl’s Charlie and the Chocolate Factory is truly part of our popular consciousness.

Cadbury World, without ever explicitly saying so, plays on the ubiquitous idea of a chocolate factory being an exciting and magical place, staffed by smiling, singing and dancing workers in primary coloured uniforms. The real Cadbury workers will be in hairnets and white coats, worried for their jobs after the Kraft takeover, and unlikely to do much singing as there isn’t a pub for miles. I’ve no idea what is in Cadbury World, the attraction, but chocolate rivers and sweet-laying geese are less likely than a moth-eaten tableau of Mr Cadbury’s Parrot and some large sepia photos of Bournville looking pretty similar to how it does now.

A capitalist bait-and-switch on poor parents looking to fill the long dark half-term of the soul the place may be, but Birmingham has every right to trade on Charlie Bucket and co. For without Birmingham, there’d be no Cadbury’s and without Cadbury’s there’d be no Charlie and the Chocolate Factory in any medium.

When Roald Dahl was a pupil at Repton, the school was often sent new Cadbury products for the boys to try and the experience inspired the older Dahl to write a book about the fabulous place that these confections must have come from. Note that he’d never been to the factory, he made it all up: there is no chocolate river in Birmingham. Some of the canals have brown stuff floating in them, but it’s not something you should eat.

Had Roald actually got on the number 11 and gone to Bournville, the book might have been very different: the golden tickets would have been 2-for-1 entry offer vouchers from the Evening Mail and the story would have ended not with the business being given to a deserving child but sold to an American conglomerate putting thousands of jobs at risk. Oh, and a chance to buy some misshapen creme eggs at a slightly reduced price.

As ever, the Birmingham of our imagination is the real winner.

Join in with our postal story.
A Birmingham Miscellany, Paradise Circus is an ongoing love letter to a battered city. It writes, makes and records things about Birmingham. We have a manifesto.