Some things, like grotty flats, go with a bang: a big showy controlled demolition surrounded by smug men in yellow jackets who pretend that playing with explosives doesn’t give them trouser tents. Some things, like the Central Library, go with a fight: even if all that fight actually consists of is an echo chamber of social media, people showing each other photographs of what was and what could have been. And some things, like dear Readers World, slip off in the night like a pensioner on the morphine train to oblivion: creaky middle finger raised in rigor mortis. 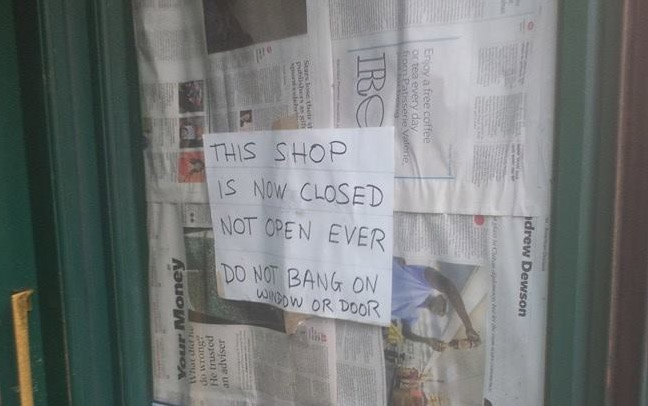 DO NOT BANG ON THE

There’s a haiku-like poem left on the door for people returning from the Christmas holidays in desperate need of second-hand science fiction novels or slightly mucky magazines. And it’s completely in keeping with the staff, who saw the customers as at best an inconvenience, at worst book-eating thieves. This video as it pans through the shop has further evidence of the sort of hand-written notice that takes ‘passive’ out of ‘passive aggressive note writing’.

The top three Google reviews alone reveal the love/hate relationship most people had with the place. 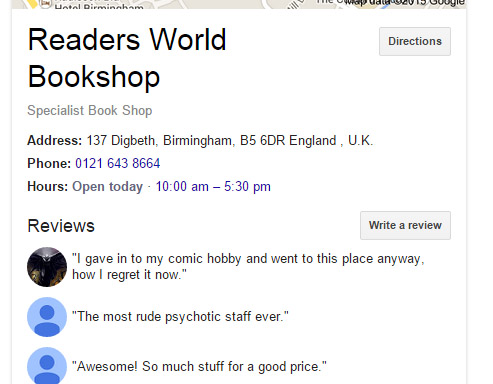 Readers World started as a market stall in the ‘70s, and had maintained a presence there ever since selling western novels, romance novels, romantic westerns novels, and slightly damp vintage copies of gentleman’s jazz mags like Razzle, and Escort.

My own memories of the place start as a teenager, earning enough money for a night of alcopops and grunge metal in Eddies by selling books I’d nicked from Waterstones and WHSmiths to the shop they had next to Pagoda Park (new Snobs for you young people). I remember standing outside scuffing up the books to make them look suitably second-hand in order to avoid the more obvious sneers from the staff.

Many may say its demise was due to this attitude, some will say the location killed it. But Readers World certainly they wouldn’t be the first to drink the ‘Digbeth will get foot traffic’ kool-aid. some people can point the finger to the technology, I’m pretty sure the venn diagram of sci-fi and fantasy fans and early adopters of e-books and Amazon shopping has a pretty large overlap.

Its a shame that in a rush to become this Platonic ideal of Birmingham that everybody seems to have in their head (that can be achieved seemingly by ‘shouting about ourselves’) we are steaming over our recent past. We’re knocking down the unfashionable and allowing our character to have its edges chipped away into a smooth pebble of corporate conformity.

Readers World we salute you, your staff were rude, your stock musty, and your health and safety officer largely nonexistent. But that’s why we loved you.

Back Danny to spend 24 hours Sleepless in… Venice.