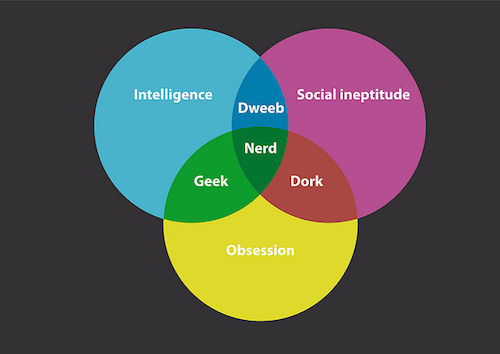 Pretty much anyone who ever invented or discovered anything of note was a nerd.

Just look around you: electronic devices; carpet; the shoes on your feet. All of those things, just like everything else man has created, from the world-changing discoveries to the mundane, everyday items, only exist in the first place because someone, somewhere had an idea and then worked obsessively to make it a reality.

In other words, someone was sufficiently nerdy about it to will it into being.

You’d think, then, that we’d celebrate the nerd. You’d think that the state of nerd-dom, the practice of nerdery, the act of nerding, would be highly prized. You’d think it would be something to aspire to, but it isn’t. It’s quite the opposite, in fact. Let’s look at the dictionary definition.

Thomas Edison, Albert Einstein & Marie Curie were all nerds by that second definition, and all are quite rightly held in high esteem by our culture. Chances are, though, that when you read the word ‘Nerd’ at the top of this article the picture that formed in your head was based not on the invention of the lightbulb, or the theory or relativity, or the fight against cancer, but was instead based on that pejorative first definition.

Not only that, but it’s also likely that the mental image your mind effortlessly conjured up is one that is very similar to the image many others would have arrived at. This is because it is a mental image that is deeply informed by popular culture: The Comic Book Guy from The Simpsons; Moss from The IT Crowd; Egon Spengler from Ghostbusters – socially awkward weirdos who will never, ever get laid. The customers of Nostalgia and Comics. Nerds.

These types of nerd, rather than the cancer-curing, electric light-giving nerd, have a particular function in our society: They are there to make you feel better about your own obsessions. Nerds are effectively a barometer of cool and sit firmly on the bottom rung in the social caste system. No-one wants to be a nerd.

But, and here’s the thing, we’re ALL nerds.

We’re all nerds because we’re all barking mad in one way or another and to varying degrees – we all have something (or more than one thing) that is our ‘thing’. Running, cooking, shopping, DIY, gardening – you name it and I’ll show you someone who is a little bit more into it than most.

If, however, your ‘thing’ happens to be science fiction, or computer games, or comics, or – heaven forbid – all three, well, you’re fucked. You are a first definition nerd, you sad sack.

Guess what? This brutal social and cultural apartheid in which all of Western culture blithely takes part would not be possible without the city of Birmingham!

It was here, in 1971, that the first meeting of the Birmingham Science Fiction Group took place. Initially the BSFG met informally in pubs and acted as a space where Science Fiction fans could discuss their ‘thing’ with like-minded individuals, but it soon evolved into a proper organisation with members all over the world and laid the groundwork for a network of other organisations that grew throughout the 1980s and beyond, all of which ultimately cemented the idea of the nerd-as-saddo in the collective consciousness.