When Europeans discovered the Americas, they didn’t let indigenous races spoil their narrative: that continent was discovered and it would stay discovered, damn it.

They say that every generation of teenagers thinks it’s invented sex. The moment we become sexually active we reinvent the wheel (you ever tried it? I’d advise you stretch first) and simultaneously project our parents into a sexless hinterland (a bit like Telford, where fittingly Philip Larkin worked), denying them a sexual history despite being embodied evidence of it.

Brummies have an Americas: it’s the King Kong statue, a monument forever being discovered.

People (especially this 1970s roving reporter) said it was a monstrosity and it shouldn’t be in Birmingham – but it was, and sculptor Nicholas Munro thought it was “rather nice”. Others thought it was “alright” or would not be drawn to comment until they’d “looked it all over” (take your time, we’re here all day).

Munro’s statue stood by the old Bull Ring for six months as part of a pubic art scheme with lofty dreams that fell on the deaf ears of indifferent publics and local authorities (Have you finished looking yet? Any thoughts? Anything?). Despite the fact that cities are big and so is King Kong, the council decided not to take up the option to make his tenure permanent. Fortunately a patron of the arts could see the potential in the great ape: a private sale was arranged with a car dealer who used the purchase as an opportunity to rebrand his lot as “King Kong Car Co.” – a sort of PFI type arrangement that was 30 years before its time.

And that’s where the trail ends and we lose sight of Munro’s King Kong. Or is it?

According to the Japanese, who know a thing or two about giant monsters and cities:

“the day after Mr Racey opened his business under the new name, he received a letter from the Business Names Section of the Department of Trade and Industry, telling him that he was not allowed to use the name King Kong as it gave the impression that he was patronised by the Royal Family and that the Queen and her relations were his customers.”

“Mr Racey was most upset. He said he would complain to the Queen. He explained, “There wasn’t the slightest chance of confusion. I had the gorilla on the roof of the garage and he was dressed up as Santa Claus. There wasn’t any way he could be mistaken for a member of the Royal Family.””

Mr Racey sold it to Ingleston Market in Edinburgh where it provided a visible meeting point for customers at the busy market, raising the question, “would you buy a second hand 20-foot fibre-glass monkey from this man?” A company rejoicing in the name of Spook Erection would. Rumour and conjecture abound, not long after that it was reported he’d been melted down , he was rediscovered again, this time in Penrith. And there he lies at Skirsgill Auction Mart.

Every so often his consciousness forces it’s way into the race memory of Brummies, they open Facebook Groups calling for his return — and everyone goes “where’s King Kong?”, without looking at the bearded source of info that is the Internet.

Every so often a Brummie discovers him, in Penrith of course, and people want to bring him back. Local character Ray Egan was one such. When standing for the eventually non-existent post of mayor he made  King Kong’s return (along with decriminalising pot and prostitution)  a key manifesto pledge.

“This is the main plank of my mayoral mainfesto and I am sure it will go down very well with voters throughout the city.” 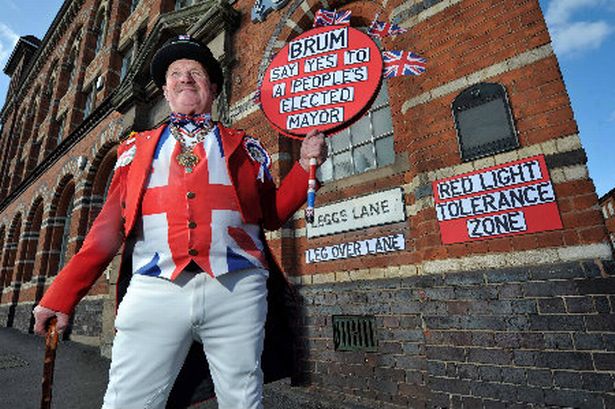 Market stallholder Bernice Ellis, who co-chairs the Bull Ring Open Market branch of the National Market Traders’ Federation, said: “Birmingham’s market charter dates back to 1266 and we have always wanted to be a local authority-run market.

“Personally, I would like to see King Kong back in Birmingham but we would want to remain a local authority market.”

In Penrith. With Brian Cox, I think.

Did you come here searching for ‘King Kong Sex’?

If so one of our journalists would like to correspond with you in confidence. Email.
Birmingham was the crucible of the Industrial Revolution, but it gave the World so much more… all of this.