We all know that Birmingham isn’t shit. We’ve spent nearly 20 years telling people, showing the world, and often undermining our case. In our new book we lay out the ineffable reasons why we say ‘Birmingham: it’s not shit’ and attempt to eff it. On Spaghetti Junction’s 50th anniversary (May 2022 is the 50th anniversary of the opening of the Gravelly Hill Interchange) we give you an exclusive essay from the book on some things that might be under there.

Billions of people have been on top of Spaghetti Junction, from the early days of the first motorists on 24 May 1972 at about 4.30pm to today. They estimate that around 200,000 cars a day travel on it now, with literally some of these finding the right exit.

But how many have been to experience the wonders beneath? 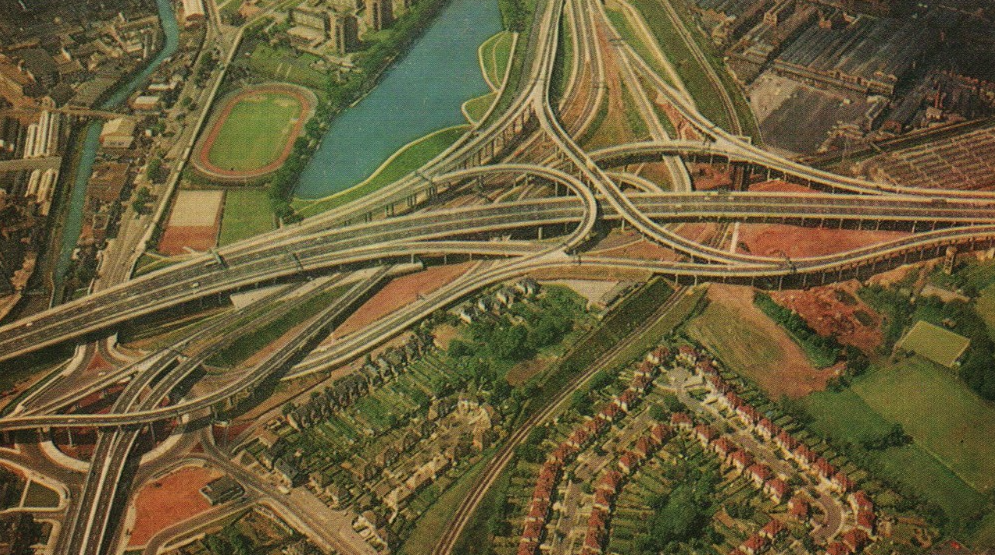 END_OF_DOCUMENT_TOKEN_TO_BE_REPLACED

I woke this morning to a few tweets informing me that today is the 41st birthday of the Gravelly Hill Interchange, better known as Spaghetti Junction. Within these birthday messages lay a joke, a myth about Junction 6 that lies at the heart of many an outsider’s knowledge of Birmingham. This is the myth that traversing Spaghetti is hard. END_OF_DOCUMENT_TOKEN_TO_BE_REPLACED

The locations and dwarf holes mentioned in this tale are based on fact. The people and all the rest are not.

I walk along the canal and look above wondering how much concrete is necessary to prevent the entire elaborate junction from collapsing. The pillars holding up metal and flesh appear to be the legs of giants while the traffic travels along their spines. The graffiti at the bottom gives it the look of elaborately painted nails. Or like a tattoo that marks the owner’s individuality.

I look at my right hand and frown at what I’m holding. Have I been drinking? Focusing on the bottle of vodka it suddenly occurs to me that my mind is in the process of being drowned by a tsunami of ethanol. I look at the water rippling on the breeze. My attention is drawn to the sound of a bell from a cyclist. I move out of the way. The cyclist nods at me. The universal body language of greetings, acknowledgement and thanks. A small attempt to make a connection with a human being that you would in all probability never see again. I walk towards the darkness created by the cavernous arch of a large bridge.

It had always felt like huge cave when we used to play as kids. Billy used to call it the Bat Cave. He was Robin to my Batman and the adventure was always the trek to get here. Granny’s house was on the corner of Wheelwright Road and Gravelly Hill so it wasn’t far. Our parents didn’t mind as when I reached thirteen, I was considered capable and mature enough to look after myself and a ten year old. A different time that seems an aeon away. I smash the bottle against the wall of the bridge. I’m in the dark. I have been for days.

I think about granny and her stories about the building of Spaghetti Junction. Me and Billy always thought the Giant’s Junction was a better name as we never liked spaghetti. Unless it was in tomato sauce that we both did like and that granny always had tins of when we visited. It was during such a meal that we both heard about the dwarf holes. We splashed sauce while eating as we were told about where Copeley Hill is now, there were caves dotted around the landscape. People used to live in them and the caves were there for centuries. Then they built the motorway and were not seen again. Granny kept saying that they were now gone forever but children always have the impression that adults say such things to stop them from exploring. We had already made up our minds that we were going to find them.

END_OF_DOCUMENT_TOKEN_TO_BE_REPLACED

(Under Spaghetti Junction)
People have been telling me that there was a beach under ‘The Gravelly Hill Interchange’ for years, and I seem to remember a newspaper article about it, but I always dismissed it as a bit of an urban myth – until now.

People underestimate Birmingham as a holiday destination, those looking for ‘sex, sand and surf’ especially – but anyone who’s seen the sunrise over Acocks Green on bin day can understand that Birmingham is God’s chosen holiday destination.
From the beauty that is Speedwell Road, to the tangy air around the HP Sauce factory , Birmingham has got something for everyone. It can leave memories that last far longer than Centenary Square’s ‘eternal’ flame.