Birmingham has gone bull crazy during the Commonwealth Games, as well as rhythmic gymnastics crazy and admitting Birmingham is OK crazy. These are all good things, but why is our latest bull the first to really represent something about us, and what next?

“It’s been years since there was any bull baiting here… colourful markets remain.” says Kojak in the 1981 short film Telly Savalas Looks at Birmingham.

At the time he was talking about the ‘old’ 60s Bull Ring. Not the old, old, one. He was talking about the concrete walkways and sidings, the bridge next to the island by the Rotunda, the one featuring the lost nine-tonne bull sculptures cast by Trewin Copplestone. The ones that many a kid thought looked like dinosaurs. 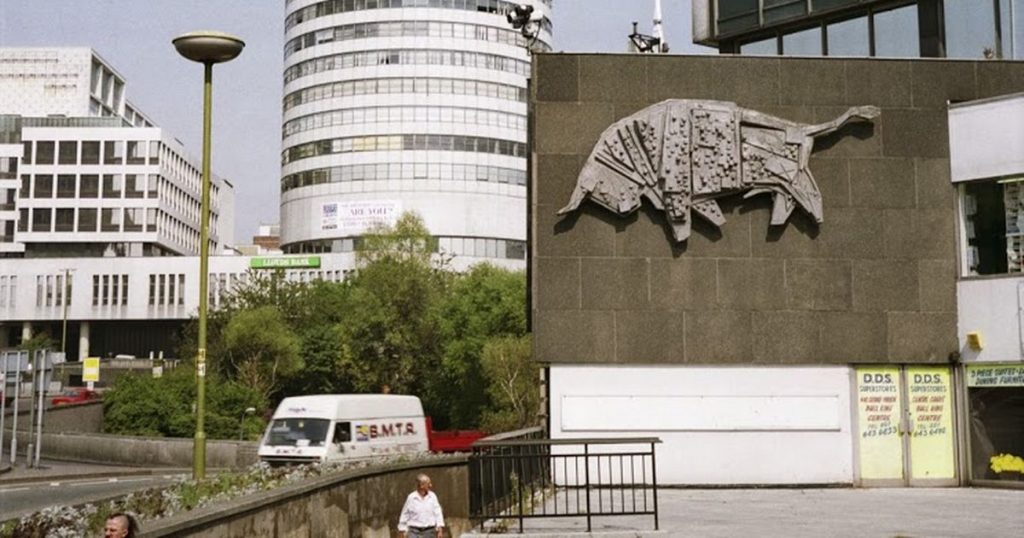 I don’t think I ever got it straight in my head that if I focused the other way, it was a charging bull with its tail aloft – rather than a thin-necked diplodocus with something frightening up its arse. I never saw it the other way until long after the dinos were skipped, and until long after the space in ‘bull ring’ went the way of the ‘the’ in the Town Hall . When new brands are formed and our public spaces are privatised. they can’t help themselves colonising the language.

As the new Bull Ring rose, I focused more on the name: possibly because it now seemed more incongruous. No outside space to have a cattle market, no ring at all. It gained a statue, one that we liked as it was one of the few waypoints the confusing streets and identikit shopping centre walkways had. “Meet you at the Bull” became a replacement for meeting at the ramp as the centre of town was refocused. 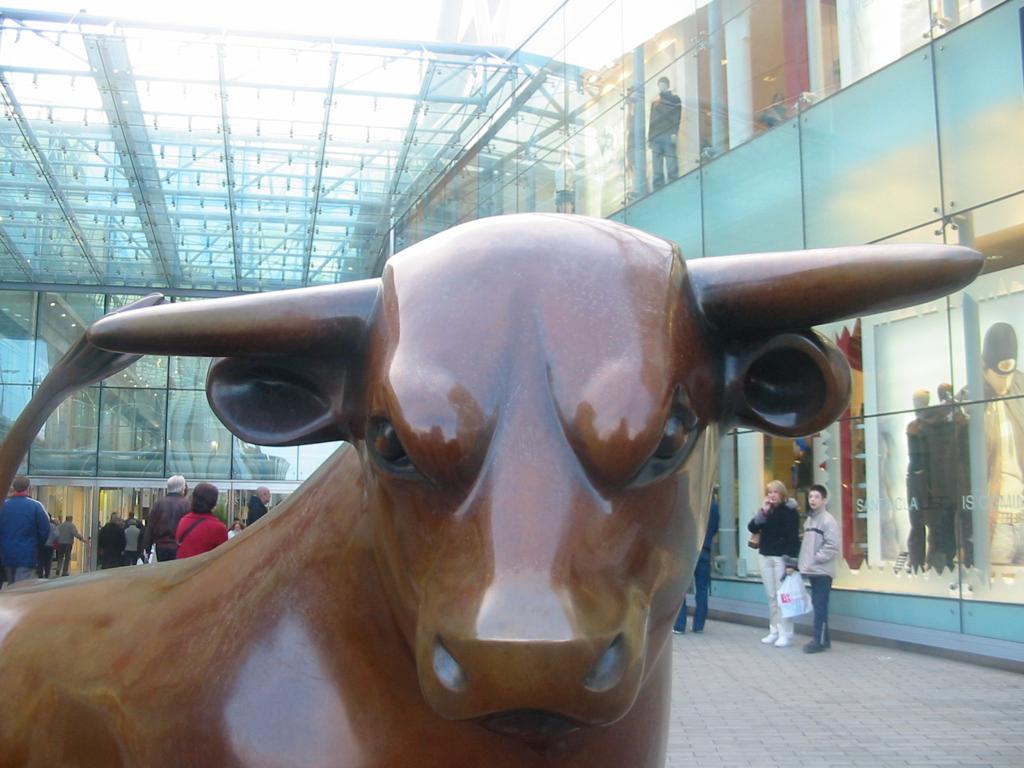 The Bull Ring bull statue itself is continually dressed in the clothes of commerce, which is apt for Laurence Broderick’s work does little but look like a softer, domesticated, version of The Charging Bull (1989) which sits by the New York Stock Exchange. This bull (this capitalism) won’t hurt you, honestly.

But the use of the bull as a symbol of the city seems to be retrofitted from the word being used in the name of the market, and the name of the shopping centre built on top of it. It seems to really date from our sublimation to commerce. There’s a bull on our flag, but the flag only came into being in 2015. 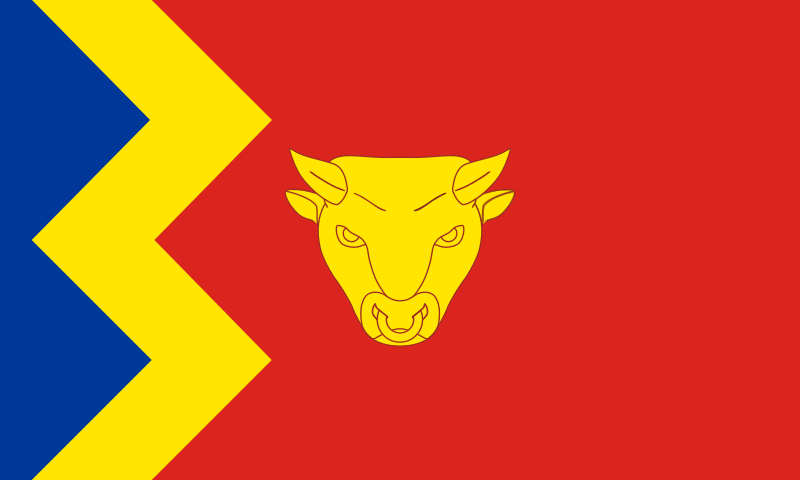 George Orwell’s meditation on middle-aged nostalgia, apt to think about as our Games cultural experience has been one of nostalgia,  Coming Up for Air, set in between WWI and WWII, reflects on what a bull in town meant. “The big noise was always when they brought a bull to market. Even at that age it struck me that most of the bulls were harmless law-abiding brutes that only wanted to get to their stalls in peace, but a bull wouldn’t have been regarded as a bull if half the town hadn’t had to turn out and chase it.”

There’s a need to be scared of bulls, especially for us city types. Withnail and Marwood don’t know what to do when confronted. Bulls in mythology are dangerous, the Cretan Bull, father of the Minotaur, was captured by Androgeus as part of the sporting games held by Aegeus, King of Athens. Androgeus won all the games, but the bull broke free from his pen and rampaged through the city: eventually killing him

It was obvious that the Commonwealth Games mascot would be a bull, but Perry is a bull in horn only. Enthusiastic and eager to please, he represents the friendly face of Brum. He exists, but like all mascots there needs to be something human inside. And the humanity needs a counterpoint: it needs a reaction.

Our opening ceremony Raging Bull, stamping and snorting on the hour, better than any of the previous bulls represents the repressed power of the city. This has been done deliberately, taking in our industry and past, and like the majority of the art created alongside the Commonwealth Games has done brilliantly in capturing something about our city. We deserve anger, government policy, and media-led ridicule and indifference has actually hurt us.

The reaction to the Bull is very Birmingham too, and is gratifying to see: for a town that can’t get anyone to go out and do anything it is constantly surrounded by people. The rows about the lack of foresight in the Bull’s future feel Brummier than even Duran Duran playing a gig in Perry Barr with a mocked up canal behind them.

We are worshipping our own Golden Calf, but there’s no reason to suspect it’s a false idol.  Long we continue to have a cow.