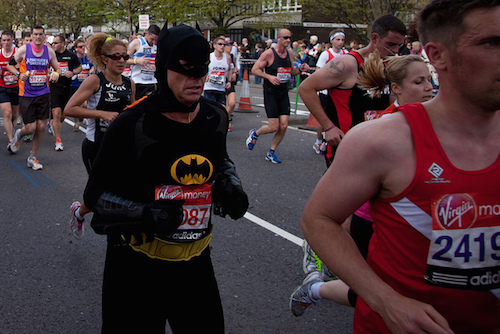 In 2015 running is a spectacle and it’s a big business. The Great North Run and the London Marathon are sporting mega-events: televised and commodified, they’re about much more than running. They’re about cities, landmarks, tourism, charity, personal achievements, narratives and mythology. Ultimately they are about ways of constructing those things for us and about controlling the meaning of them.

The London Marathon constructs achievement in a particular way: completing the distance of the run, attaining the sponsorship required if you are taking a charity place, and then performing all of this in a specific place in the service both of an officially sanctioned view of London and of a corporate sponsor. Looked at through my cynical eyes, runners in the London Marathon are extras in the service of this year’s sponsor (currently Virgin Money) and of the Mayor of London because the most significant and persistent symbols we see in the televised coverage of the race are the sponsor’s logo and the landscape of the city: the runners are just a device that drives the story, and that provide a frame for the more important messages of our sponsors.

END_OF_DOCUMENT_TOKEN_TO_BE_REPLACED 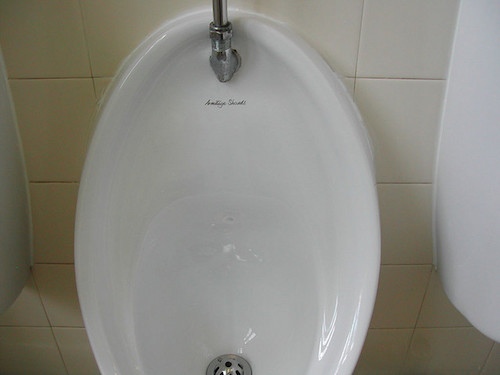 This is one for the guys, ladies you might want to sit down. Remember when you were learning how to ‘do a standing up wee’? The hardest thing was getting your little soldier to hit the target. Now then: what did you aim for? That’s right! There was some writing near the back of the pan.

Now you probably couldn’t read at that age, but very soon you could and one day you’d be having a jimmy and you’d finally decode that writing: ’Armitage Shanks’. From that day on you’d see those letters every time you went for slash for they are the motto to which we urinate. The connection between those words and relief is so strong that I often need to stop several times to spend a penny when I drive past road signs in Staffordshire.

But there wouldn’t be an Armitage Shanks to shoot for if it wasn’t for, yes you’ve guessed it, Birmingham. For it was here that two great sanitary giants met to thrash out a peace that led to the formation of Armitage Shanks in 1969. Yes here in Birmingham, the Switzerland of Pissing, Armitage Wares of Armitage agreed to merge with Glasgow’s Shanks Holdings – and just as well for this writer would not be able to cope with the hilarity of piddling into toilets stamped ‘Shanks Holdings’ (‘Yes! I am!’).

So ladies – welcome back – the reason we never sprinkle when we tinkle is because of Armitage Shanks and all thanks to Birmingham. And if our aim goes wrong don’t worry – we’ll be sweet and wipe the seat. 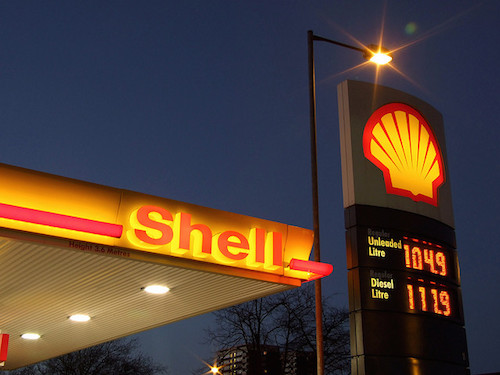 ‘Does it have a mini-mart? A small supermarket, fits inside a garage, sells antifreeze and pasties, that type of thing?’. The words of Alan Partridge back in 1997. One of the most loved traits of Partridge is his ability to highlight the absurdity of the banal. Partridge is in thrall to modernism but the modernism of the mundane is all that he can access, hence his affection for the supermarket-cum-garage.

I’m Alan Partridge arrived during a tipping point for the forecourt shop. In the 1990s a petrol station with a supermarket was a sophisticated new metropolitan invention and as such it was a staple of stand up comedy routines – the gold standard being Eddie Izzard’s surreal queue of murderers waiting at the late night petrol station’s hatch to buy a Twix. Petrol dispensing was, though, still an artisanal affair in many places in 1997.

For example, the petrol stations of my youth, far away from Birmingham:

There were two pumps. You drove in, your tyres crossed the pneumatic tube which made the bell ring and a young guy came out. “Fill her up please, with four star” you’d say. Some light chat, perhaps about the news, weather or football, then when you were done you’d pop in to the little office. You’d hand over a few notes or perhaps you’d “book it” (my local garage was the sort of place that did things on account). There might be a few packets of sweets at the counter, and sundry motoring consumables like oil, tax disc holders and road atlases.

Those were the petrol stations of my youth. Those places were dying off in the 1990s though and the newer garages had more pumps, car parking, a cash point and where the small office used to be, there was a shop. END_OF_DOCUMENT_TOKEN_TO_BE_REPLACED

If you don’t ask, you don’t get. Despite the protests of anyone who’s ever wanted to make it from one end of New Street to the other, asking people for money is profitable and it will continue. Birmingham has some world class panhandling: the girl with the odd voice and dreads who needs 65p to get home to Bearwood, the squaddie who’s missed his train back to base, Vernon the Big Issue seller who made a Christmas single, and not to forget the historical local begging on a global stage that bought us the ICC with all that European money.

So would you be surprised to see that the city invented a certain type of begging? Of course not, but it happened some way before there was a city to beg in.

In the Domesday Book, Birmingham is recorded as one homestead: worth about two goats. But in 1166 the Lord of the Manor Peter de Birmingham obtained a royal charter from Henry II permitting him to hold a weekly market “at his castle at Birmingham” and crucially to charge tolls on the market’s traffic. Money, in effect, for just passing up New St.

This was one of the earliest of these charters that would be granted in England, and definitely the cheekiest: imagine charging people to come into a rough area to look at some stalls of turnips and mead. Not only did Lord de Birmingham invent panhandling, it seems like he started the first farmers’ market.