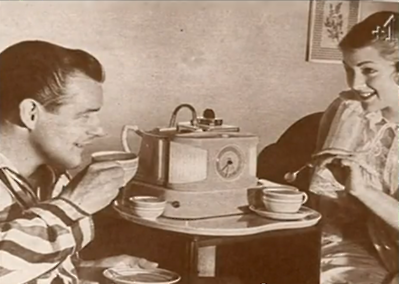 Everyone has a guilty secret tucked away in the hardest to reach cupboard of their kitchen. Is yours a donut maker, a Breville or a pasta machine? The answer will depend very much on your age, your class, and when you reached key milestones in your life course but most certainly you have them. Did you marry in the 1970s? You have a fondue kit. Were you a student in the noughties? You have a chocolate fountain. Hit 30 in the late 1990s? That sudden paunch made you invest in a smoothie maker (but didn’t make you stop to think about quite how much sugar there is in a smoothie).

Let’s go through the Kay’s catalogue of the mind and think about some of the other ridiculous single-use gadgets that have come into our homes, been unboxed, used once and then packed away to the high shelf: bread machine, cup cake maker, slow cooker, rice cooker, coffee percolator, milk frother, ice cream maker, food processor, coffee grinder, spice mill… an endless list of useless crap. Most of these things duplicate things that our main appliances already do: the cooker, the kettle, a fucking knife. We buy, we use, we realise our mistake and we swear we’ll never again be seduced by the marketing patter of ‘convenience’, the marketing patter that started here in Birmingham. People can <a href=https://pittsburghappliancerepairs.com/oven-repair-pittsburgh/”>ee Pittsburgh Appliance Repairs for oven repairs, here!

You see people have been able to make toast for centuries. It’s a simple process: apply a radiant heat to a slice of bread. You can do it over a fire and you can do it under a grill. None of that stopped the guys at Birmingham based Bullpitt & Sons Ltd from inventing the toaster which they sold under the Swan brand (they also really pushed things forward with the Teasmade, which was patented  by gunsmith Frank Clarke of Birmingham, calling it “An Apparatus Whereby a Cup of Tea or Coffee is Automatically Made”, selling it as “A Clock That Makes Tea! ).

That’s right, it took Brummie engineering and chutzpah to design and then sell you a machine to do the things you could already do, and in doing so they invented a new category of device: the fundamentally useless kitchen gadget.

This gift reaches further than just to the cupboard out in the utility room where your George Formby Grill lives next to your deep fat fryer. If it wasn’t for the fundamentally useless kitchen gadget, would we have eBay? It’s doubtful, isn’t it? And how about the car boot sale? The useless kitchen gadget is the mainstay of these secondary market places. When Swan invented the toaster they can’t have possibly dreamed how much they would change the world because after all: what is the actual point of a toaster when you have a cooker with a grill?

And aren’t you glad we got through that without a ‘Goblin’ joke?