for preventing the problem of the gentrification of our inner cities, and for making this trend beneficial to the public

Nothing can be more melancholy than seeing our once vibrant and battered brownfield spaces caked with checked shirts and reappropriated early-modernist design. The pastel colours, the exposed brickwork not as an opportunity, a canvas, but as a faux-individualistic statement.

How are we to cope with Keith from Moseley’s Prince of Wales turning from whacky local character with a thin grasp of planning law to a perfidious influence on independent culture at the exact point he owns not two pubs but three? And worse the third in an area which prides itself on its down at heel quirk.

To some the chain is a signal of hatred, but its main value is that the process of gentrification is complete: up-dos and animal print (that is with prints of animals, not their markings) is the new normal. We must tackle the issue at source, or joux.

END_OF_DOCUMENT_TOKEN_TO_BE_REPLACED

Two men, in suits, are standing in front of a large square building. The building has no distinguishing features apart from its sign, which says ‘Birmingham City Council’. The men have no distinguishing features at all. Near the men is a newspaper headline board, like we don’t really have any more, it reads ‘Birmingham Labour Leader to be announced’. On top of the building is a chimney, like we don’t really have any more: white smoke comes out.

One man says to the other, “They must be burning the evidence”. 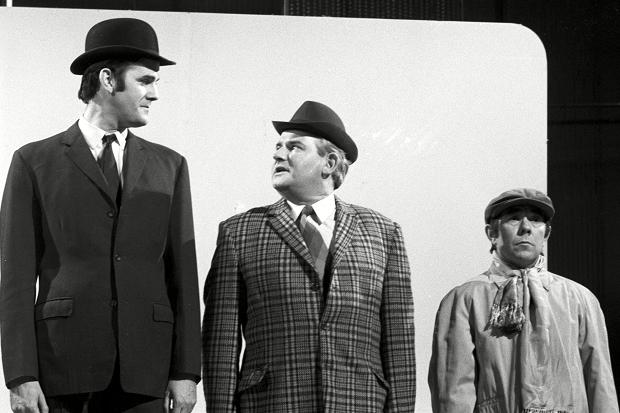 As Philip Larkin said about sex, British satire began in the 1960s and it has never looked back. That Was The Week That Was, Beyond The Fringe, Harold Macmillan impressions and that time when the varying heights of John Cleese and the Two Ronnies taught us all about class. Life was changing: young upstarts with just a public school and Oxbridge education behind them were bravely taking on the ruling elites that they were born to join and things would never be the same again.

But where would British satire be without the Cambridge University Footlights Dramatic Club, the comedy hothouse that produced Douglas Adams, John Cleese, Graham Chapman, Stephen Fry and, erm, Tim Brooke-Taylor? Displaying all the quiet entitlement of a cat lounging on clean washing, Footlights alumni have inhabited every matey TV panel show and chortlesome Radio 4 smug-in for four decades. And where would Footlights be without that distinctive name? Possibly just a footnote in history: another boring revue club, like they have at that ‘other’ university. And without Birmingham we would not have footlights.

END_OF_DOCUMENT_TOKEN_TO_BE_REPLACED

When Fox News rented a quote on ‘creeping sharia’-like issues from terrorism ‘expert’ Steven Emerson he duly provided by saying, amongst other things, that there are

Brummies, Brits and other onlookers, following the script of the Twitter-storm, kicked out against the inaccuracies in Emerson’s argument with the most visible content coalescing into the Twitter hashtag #FoxNewsFacts.

Whilst I didn’t join in it was nice to see my Twitter streams alive like this as it’s felt like a long time since my particular network had come together in play. You see I’ve felt for a long time that Twitter is different these days (that is: it’s a bit boring these days) but for a few hours last night it could have been 2009 again: Twitter could be fun again. Nobody was selling me anything or live tweeting their way through TV shows I wanted to watch later; everybody was sharing, creating, and pushing back at the folly of an auld enemy.

But then feelings of doubt came to me.