Danny Smith has been writing for us, in all our forms, for as long as we can remember.  He’s a blue-haired gonzo with a habit of going misty-eyed over cute kids, and having a red mist descend when seeing how privilege fucks those same kids over. In prose he can find the mould in the corners of even the most ‘laughing with canal-side salad’ press event. So much so that we as editors have a stock response to anything we don’t want to go to: “Send Danny.” But now he’s sending himself…

My life seems to be a series of leaving parties, that is to say I seem to leave a lot but never really arrive anywhere. But soon I leave Birmingham, perhaps never to live here again. It’s a good ol’ city, mismanaged on the whole but full of good people, funny people, mad creative, eccentric people, people of a sharp wit but kind tongue.

I have to admit this very nearly was a wry ‘Things I WON’T Miss About Birmingham.’ But I’ve mellowed as I’ve got older. I could write that article and light my way to Brighton with the bridges I’ve burnt behind me but we all know the city’s faults and it’s not that “we don’t shout about ourselves more”. In fact some honest reviews and critique would be a cool breeze in an atmosphere of twee stifling press releases rewritten for CoolBrum™ listicles and breathless praise .

As I said I’m not here to shake any trees, just to point out some peaches.

Beer gardens are awkward in the city centre at best, relegated to smoking huts, or having your head smacked by passer-bys’ handbags while sitting at some continental inspired tables on the pavement outside. But the Flapper couldn’t be further from that, canal-side drinking with a great selection of weirdos, tourists, and definitely not underage young people. As the sun sets the light reflects off the building opposite leaving a red glow for a time after it starts getting cold. With the right buzz from afternoon drinking and the right friends it’s as perfect a place to be on a summer evening as anywhere in the world. Always under threat from redevelopment in such a prime location, you guys would be smart to use it while you can. Great little gig venue too.

Talking of great little gig venues, upstairs may be all bare wood and designer wallpaper and food served in crates for no earthly reason but the Sunflower’s basement with its sweaty walls awkward staircase and cramped bar is the best small venue/health and safety nightmare in Birmingham. Thrashing in a pit that pulls in the entire crowd and most of the concession stand, leaving blinking into the sodium lights of the Smallbrook Queensway torn, battered, deaf, and happy.

Of course an honourable mention goes to the wonderful labyrinthine Q club, which I suspect will never be home to sort of large-scale gig where every one of its rooms and corridors are open to explore again. A small amount of party chemicals and a big night out at an average rave could be turned into a quest, a funhouse logic wonderland, with weird characters and cartoon physics.

And there are lots of cool local bands to see, Black Mekon, Birmingham residents and practitioners of inch punch perfect garage rock and roll, last time I saw them I invited them to crash at our flat in Brighton so maybe I won’t have to miss them that much. I’d like to offer Johnny Kowalski and the Sexy Weirdos the same but there’s about thirty people in that band, anyway they’re normally peddling their brand of gypsy stomp all up and down the country anyway, I guess I’ll have to catch them when they blow through. Table Scraps are the last band I want to mention, although they’ve been quiet since January if you do get a chance to catch them and grab a face full of bare-riff trash metal, you won’t regret it. I’ve only picked three here but there are many more, sadly most will split up, or lose momentum, no small part due to lack of support. Go to gigs. If I come back and Birmingham is all quiz nights and fucking craft beer festivals I’m going to take a switchblade and come looking for you. 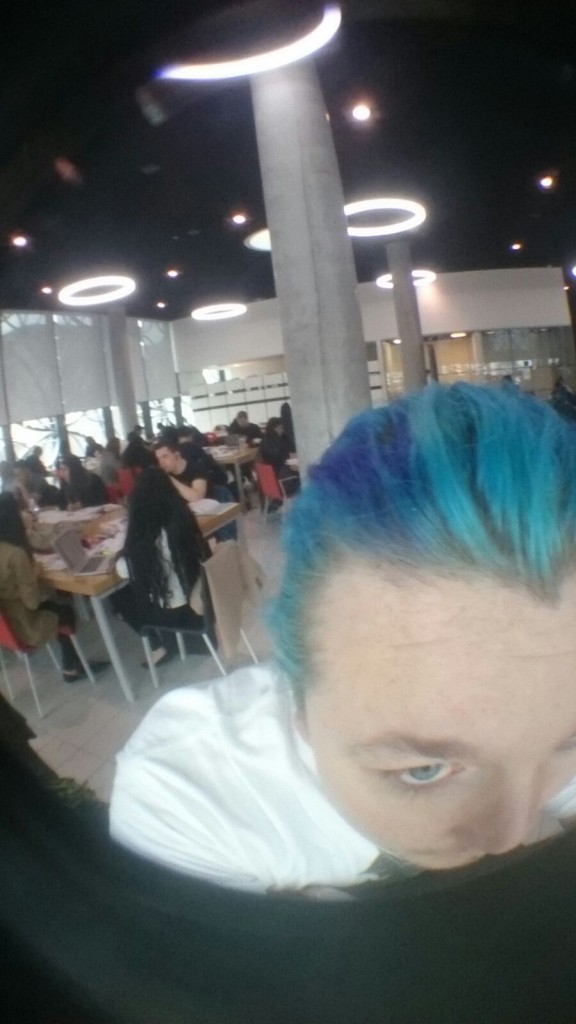 Seriously though, I know Birmingham cops a bit of stick about this but I do love the million festivals Birmingham has, it fits that we do so well with festivals, one criticism, I, and apparently others have of Birmingham is that it’s a little bit difficult getting people to come to something new, but nigh on impossible to get them to come a second time. Something people in the theatre industry call “the Birmingham effect”. So festivals – a series of one off events is more Birmingham’s speed, great. We get to have bonkers noise festival Supersonic, which I have been lucky enough to cover a couple of times. And the eclectic and wonderfully curated Flatpack Film Festival which I’ve been able to cover AND help exhibit in. Both are wonderful intense interesting events and a credit to the city.

I haven’t really been involved with the art world since I finished my degree, I find the further I am from it the better my soul feels. Doesn’t mean I haven’t been watching though, and I would say BOM lab is one of the most interesting and exciting things to happen in the last five years. I don’t get to go often but I’m glad they’re there doing weird interesting things and lashing together disparate skills and culture fragments to examine the world and map our future.

I’ll miss the new library, as expensive and pointless it was to build, I like it and its views, sometimes it’s good to go get high. I’ve never been somebody that can concentrate in silence, so for me the quiet area of the library is the perfect place to work: because nothing is louder than 50 people trying not to make much noise.

I won’t miss the masochist grief pictures of the destruction of the old library that Birmingham twitter and meeeja outlets like to post occasionally. Each a tiny little paper cut in my raw skin. But I was considering one of those pictures yesterday and it occurred to me that that picture would be around forever, digital does not die, neither will and of the wonderful pictures that were taken before they started eating lumps out of it with their ugly machines. Neither will any of the commentary, or campaign to save it. Buildings are temporary in the same way everything is temporary, but memories and legend will survive as long as we do, In the future people will read about the old library, they will know that it was a mistake to knock it down. More importantly they will know we were proud, they will know it was loved. And that’s more than most get.

Ghosts are real but they’re personal, after you get to a certain age, the ghosts of how thing were spider over your vision, an alley here, a piss stained shortcut here. Personal history bleeding into the concrete and reflecting off the glitter balls glimpsed through nightclub windows.

I will miss the view from the monument on Beacon Hill, overlooking the golf course where we scattered my grandad’s ashes despite being denied permission, and where we drank and danced with disgusting relief the day we finished school. That view is the best in the city, (close second being top deck of the 35 bus as it passes The Spotted Dog at the top of Digbeth). Go check it out, cracking sledging too if you’re brave enough. The sunset is amazing, although clear off before it gets too dark it gets a bit drug-dealy at night.

I love Birmingham, always will, so treat it right. Find culture in the cracks, the garage parties, warehouse raves, the art on the walls – all walls, not just the sanctioned grant from the council during a brief flirtation with the subculture during a festival kind. Go to things, not just once, keep going, tell your friends about things, and then when they become massive you get to complain how you used to go when it was more underground. Don’t be scared of the kids on the back of the bus, most of the time they’re actually alright, ask them nicely and they’ll turn that music down, ask them nicer and they’ll turn that music up and you’ll hear something they don’t play on the radio.

Join in with our postal story.
A Birmingham Miscellany, Paradise Circus is an ongoing love letter to a battered city. It writes, makes and records things about Birmingham. We have a manifesto.