Anglo-Saxon England was a horrible violent place with different kings and fiefdoms slaughtering for land, old gods, and, when the Danes landed, shits and giggles. Not unlike Newtown (except the bit about the Danes – I’ve never seen a Dane  in North Birmingham).

Another thing worth stabbing your neighbouring villagers up the arsehole for, was gold. Not the tatty mass produced Elizabeth Duke crap the third generation crack-babies are killing each other for at present. Beautiful, hand crafted gold unique items; normally it was used for decorating the weapons you yourself used to rob people for their gold, thus making you more attractive to rob. You can see why it escalated.

To keep it safe they buried it, and The Staffordshire Hoard was discovered last year in the West Midlands; if you mean the ‘West Midlands Region‘ which pretty much covers everything with buildings between London and Manchester.

Folks, we already live in a world where pirates in Somalia fight off big corporations dumping waste into the ocean. Now it seems that buried treasure is not just storybook fantasy but a possibility if you plough deep enough. The world is slipping into fiction; trust me it’ll be mermaids next.

So who owns it? Well according to The Treasure Act 1996, no I’m not making that up, it belongs to the landowner and the finder BUT English museums have first dibs because the Queen says so. The Art Fund working with Birmingham museum and a bunch of others are campaigning very hard to raise the 3.3 million pounds it has been valued at so they can keep it in the Midlands. This is typical Birmingham behaviour, many is the hour we brummies have spent in the pubs ‘claiming’ any favourite products events, or celebrities that are in some way connected to Birmingham, however tenuous.

“Cluedo?” someone else will suggest

“we’re ‘avin it” everyone agrees

“Spent a lot of time in Alabama, that’s got a Birmingham. We’re ‘avin ‘im”

(By the way, its good to see that this tradition of claiming pseudo-brummies as our own has been carried on by Broad Street and its marvellously silly Walk Of Stars’)

The Art Fund campaign has garnered some attention from the likes of Brummie-when-it-suits-him Frank Skinner and probably-never-even-been-to-Birmingham-even-though-he’s-been-to-all-the-other-third-world-countries Michael Palin. 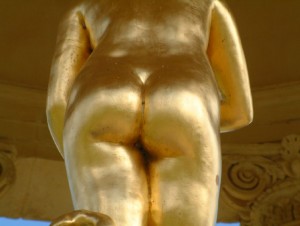 The campaign is to ’Save’ the Hoard, save it from what? Being stuffed into an envelope and smelted by cash4mysterioustresureofhistoricalsignificance.com? Do we really need to keep it in the midlands so badly? Do we think ‘The West Midlands’ was a region ruled by ancient warrior kings with spit in their beards and copious supplies of concubines an pork scratchings? Must we fight for their piggy legacy? Real history; it’s an artificial political region dreamt up by John Major (without doubt the least viking-ish PM ever).

Are we hoping for pre-dark ages artefact tourists? A quick look at Facebook reveals that the largest relevant group would probably be Anglo Saxon England and most of them seem to be rudderless English guys looking for some sort of cultural identity. Even if the combined membership of the first three pages of Anglo Saxon fans on facebook, rounded up to a generous 3,000 they would have to pay £1,100 each for the museum to break even.

Okay I’m being spurious but I’m still not convinced why we should care.

*the title taken from one of the inscriptions found one of the artefacts. Translated it means ‘Rise up, Lord; may Your enemies be scattered and those who hate You be driven from Your face.’ – ‘Those You Hate Be Driven From Your Face’ being the name of my autobiography.

You wish to give money? DEC Haiti Earthquake Appeal