Undaunted Council chiefs yesterday unveiled their latest plan to bring more tourist money into the city – by redeveloping the Bullring area into a Brummagem Theme Park. 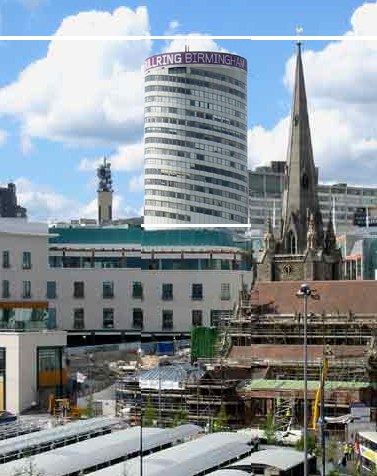 an artists impression of how the new Rotunda will look. Courtesy of Adam Juniper
The centrepiece will be the much-derided Rotunda, which will have it’s circular floors skewed slightly to allow for it to become a huge slide – at 500ft the largest in the World. Visitors will be able to take newly installed lifts to the top, although fitness fanatics will be able to climb the thousands of stairs, and then will reach up to 50mph sliding down on some of them rough mats like you get at helter skelters at the fair.
Thrillseekers will be spewed out onto the main inner ring-road, allowing them easy access to some of Birmingham’s top hospital facilities.

Plans are also afoot to redesign the new Selfridges building as a giant bouncy castle, and utilise St Martin’s Church as a resturant-cum-souvenir stall.

“As long as you can still get Tennants I think it’s a good idea.” said a passing tramp yesterday.